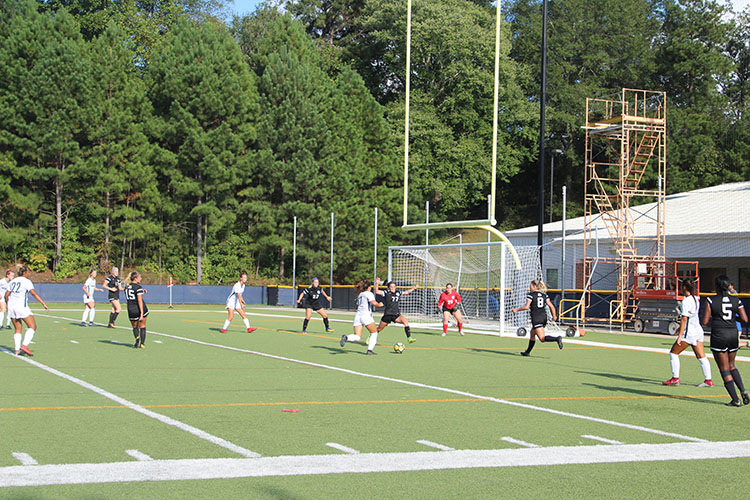 WALESKA, Ga. – No one could stop Eagles forward Adrien Merilless as she scored three times in the Eagles 7-0 victory over the opposing St. Andrews Knights Sept. 30.

The Knights came into University Stadium looking for their first win on the year, but were ultimately stifled by the Eagles swarming defense. The Knights were only able to manage four shots, with all of them coming in the first half.

In the 59th minute,fans started seeing double when Merilles got another shot in the back of the net from Smotherman. In the 75th minute, the Eagles put up a pair of goals from Whitlen Hancock and Smotherman, with Smotherman getting her pass from Diaz. Looking at a 5-0 advantage, Reinhardt was not done scoring, as goals by Jordyn and Jane Howell put the exclamation point on a one-sided affair. Jazzmyne Garcia and Kayla Gilbert each picked up an assist on the Jordyn Howell goal.

Eagles goalie Caroline Johnson picked up three saves without allowing a shot to get past in the contest, while Knights goalie Liz Garner saved eight shots while allowing seven.

Even though three starting players were not participating in the game due to injury, the Eagles showed that their entire team is capable of playing hard and fighting for the win.

Reinhardt’s next match is a tilt against the Columbia International University in Columbia, S.C. The match kicks off at 5 p.m. on October 3.