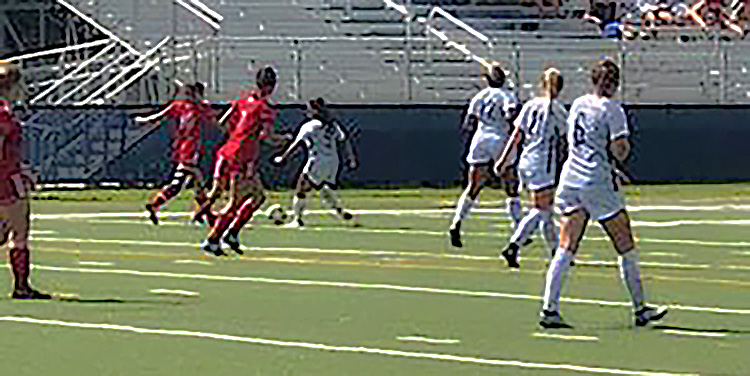 WALESKA, GA. –  The Reinhardt Eagles Women’s Soccer team beat the Bluefield Rams 8-0 on Sept. 23. This week’s shutout was an Appalachian Athletic Conference game which put the Eagles at 6-3 for the season and 4-1 in the conference.

The Eagles displayed one of their highest scoring wins of the season, with six different players receiving at least one goal, helping their team contribute to the shutout win against Bluefield. The team effort that the Eagles displayed was relentless and ongoing throughout the entire game.

In this Sunday afternoon performance, the Eagles dominated on the stat sheet as well as on the field. They had an advantage in shots as they accumulated 40 shots altogether and 21 on the goal. With Reinhardt having possession majority of the game, Bluefield accumulated a total of two shots with only one being on goal.

The entire roster of the Eagles got an opportunity to play at least a half of the game, which hasn’t happened in any other game this year. This game was indeed a team effort, as every team member contributed to the victory over the Rams.

Both the offensive side and the defensive side of the Eagles played phenomenally as they netted four attempts in each half while keeping a shutout both throughout the entire game. Morgan Green and Se Se Rutten each scored in the first half at 9:10 and 24:21 respectively, while Celeste Diaz provided two goals herself at 28:24 and 29:52. In the second half, Elisabeth Dunlap and Kayla Gilbert each found the back of the net at 53:20 and 85:86 respectively, sandwiching Jazzmyne Garcia’s two goals, at 78:42 and 83:10.

Midfielder Jane Howell led all assist-getters with two, while Adrien Merrilles, Celeste Diaz, Se Se Rutten and Summer Montgomery all got one of their own.

The Eagles will ride their win streak into the game against St. Andrews University on Sept. 30, at 3 p.m. on Ken White Field at University Stadium. For more news and updates about Reinhardt athletics follow our social media platforms: