Film Review: Castle in the Sky 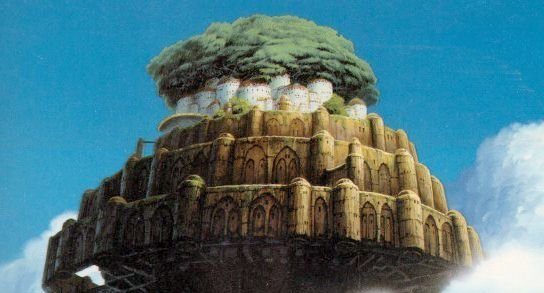 Last year at Walmart I purchased two films: Princess Mononoke, and Castle in the Sky. I have heard of Studio Ghibli through my traverses across nerd/geek culture but never watched any of their films. No particular reason fueled my disinterest, but the current avalanche of content from the Marvel Cinematic Universe (the potato chips of pop culture). I decided to engage with the two Ghibli films that I acquired. In short: I love them. Here are some reasons that these films mean so much to me.

Castle in the Sky, released in 1986, was the first film created by Studio Ghibli, and thus holds a certain amount  acclaim in the world of pop culture. Hayao Miyazaki directed this feature film and took inspiration from various sources. One of the origins of inspiration were the fresh ideas he had in mind for the anime series “Future Boy Conan” along with the novel “Gulliver’s Travels.” The country of Wales seemed to be drawn upon heavily for the story’s setting and locale.

In the beginning, we see government agents engaging pirates aboard an airship in an attempt to kidnap a young girl called Sheeta. Sheeta eventually escapes through her own volition but falls off the blimp. Meanwhile, Pazu, a young boy of a small mining town, is helping his boss at the mines when he notices an unconscious girl floating down from the sky. Pazu takes this girl to his house when she wakes up the two bond, and Sheeta reveals her blight, pirates and government agents are after her and her magical amulet. After this, the children are forced into a chase scene by the pirates. This pushes them into an old abandoned mine, where an old coot that takes residence in there reveals that Sheeta’s amulet is made of a mystical material called Aetherium.

Feeling confident enough that the pirates have given up, the companions leave the mine, only to end up in the hands of the army. Both are imprisoned in a military fortress, Sheeta and the audience are introduced to Colonel Muska, who reveals that the government is searching for the legendary floating island Laputa. This search was spurred on when a robot fell from the sky, which they are currently holding in the fortress. Muska promises Sheeta that they would allow Pazu to leave unharmed if she agrees to work with them. Sheeta agrees to this and emotionally pushes Pazu away, dejected Pazu returns home, where he finds the pirates dining in his house.

The pirate captain Dola sees through Pazu wounded ego and reveals why Sheeta abandoned him. Feeling guilty Pazu joins the pirates so he may save his friend. During all this Sheeta remembers various spells her grandmother taught her, hoping to be rescued by them she says one out aloud. This causes the robot to reactivate and goes on a rampage to free Sheeta. Pazu and

the pirates arrive when the carnage is at its height. This complicates the rescue, but eventually, they are able to liberate Sheeta.

However, they fail to realize that her amulet fell off her during the chaos and is now in the hands of Muska and the military. The two friends agree to temporary join Dola’s crew so that they can beat the government at finding Laputa. In time the pirates and the military arrive at the floating citadel. It is here where Muska reveals his true colors, he had no interest in helping the government in locating Laputa, he did this solely for his own ends. For in truth he and Sheeta are descendants of the Laputa’s royal family, and he seeks to reestablish the island to its former glory at any cost necessary. Sheeta realizing the truth behind her family’s customs comes to the conclusion that the Laputans abandoned the fortress willingly so that they can be closer to the earth. Through various shenanigans, Pazu and Sheeta regain ownership of the amulet a say one final spell, the spell of destruction. This spell destroy the majority of Laputa and launches the rest of it in the upper atmosphere. With this adventure past them, Pazu takes Sheeta home, and they lived happily ever after.

The animation of the film is  exceptional, which is to be expected from Studio Ghibli. It fills the tale with much-needed charm and whimsy make the story work at a more impressive level. The film also leans heavily on steampunk and other Victorian aesthetics. For those unaware, steampunk is a subgenre of speculative fiction that takes massive inspiration from the Victorian era of England. This subgenre is known for its somewhat anarchic designs for technology which often places the visuals of a machine over its functionality. Hayao Miyazaki is well known for his interest in planes and other flying machines, so it is no real surprise that he would use these design principles.

Studio Ghibli’s “Castle in the Sky” is an enjoyable action-adventure movie that anyone can sit down and engage with. Its fairytale inspired plot makes the whole experience a pleasant one, with an aesthetic that is extremely pleasant to the eye. If you have an afternoon open, you’re bound to have a good time with this.