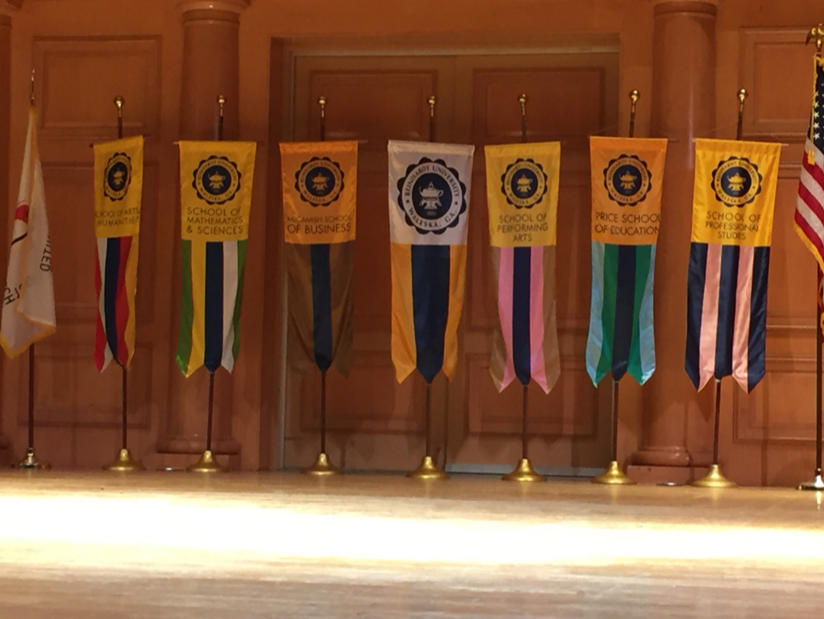 The night started at 7 p.m. and all the freshmen started coming into the affectionately-known FPAC. Everyone was required to dress business casual, coming in their best. Students checked in and signed the Honor Code — a statement that validates that you will uphold academic honor as a Reinhardt eagle. The ceremony began with an induction by Reverend Jamie T. Hudgins, the Campus Pastor. He spoke of Reinhardt, and what signing the honor code truly meant; not just upholding academic honor, but your honor as a Reinhardt student.

After Reverend Jamie, David S. Nisbet, the Associate Professor of Theatre came and read poetry written by Mark A. Roberts. It spoke of thriving in beautiful Waleska Georgia, up high in the mountains, and in the city where mountains are tall and rivers run low. It was well received and inspired many of the young hearts sitting in the theatre that night.

Shortly after remarks by Mark A. Roberts himself, all the students along with the chorus stood and sung Reinhardt University’s Anthem. The chorus was conducted by Martha Shaw, and the students in the chorus sung beautifully. The students were told that they would be singing the University’s Anthem not only that night, but at the 2023 Graduation as well. It served as a beginning point and will serve as an ending point to those 2023 graduating students.

After the University’s Anthem came the introduction, and shortly after the speech of the keynote speaker. This year’s keynote speaker was Reverend Thomas Alonzo “Lonnie” Lacy the second, who graduated from the class of 2002. He began his speech enthusiastically, immediately drawing in all of the students. He spoke of his time at Reinhardt, and how special it had made him feel compared to other colleges. He spoke of how he wrote the first version of the honor pledge, and how before that he stole the president’s parking sign, which earned many laughs! He ended his speech by telling the students that they were finally home and that their lives had led them to be at Reinhardt.

The Remarks of the Student body came after, by the Student Government Association President Joshua Teague, shortly followed by the reciting of the honor pledge itself. The Honor Pledge speaks of Reinhardt University as a whole. Speaking of its honor and integrity towards academics, and each other. It speaks of keeping up honesty, and responsibility as a student at the University as well as how a student of Reinhardt University must keep up their pride, and treat one another respectfully.

Once the Honor Pledge had been spoken, the class of 2023 had officially been inducted! It was met with happy faces and laughter of excited students new to the community. The students then sang the Alma Mater, once again lead by Martha Shaw, then gathered on stage for a class photo.

It was a lovely night and a fantastic induction for the new 2023 students!