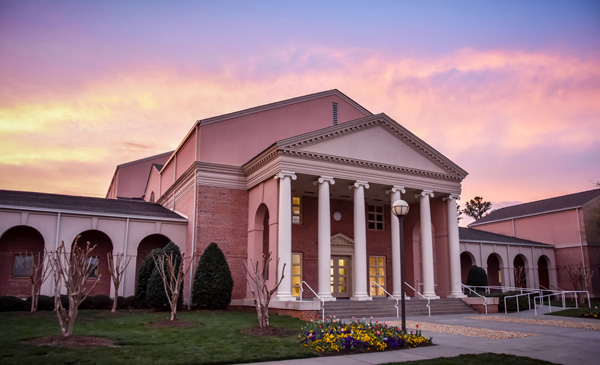 WALESKA, Ga. — Thursday, August 22, the Reinhardt University graduating class of 2023 convened in the Falany Performing Arts Center at 7:30 p.m. for the 20th Annual New Student Induction Ceremony. The students arrived at 7:10 p.m. and as they walked in they were asked to sign one of two copies of the Student Honor Code, located on two tables in the middle of the lobby. After signing the Honor Code, the students were escorted into the theatre and to their seats where they eagerly waited for the ceremony to begin. To begin the ceremony, the students were asked to stand during the Processional as the Reinhardt faculty, in their various gowns, made their way to the stage. They remained standing for the Invocation which was given by the Reverend Jamie T. Hudgins, the campus pastor, and following the Invocation, the ceremony truly began.

Dr. Walter P. May, the Dean of students, began the ceremony by welcoming the students and congratulating them on having reached new heights in their academic careers. Following his remarks, Dr. May introduced David S. Nisbet, the Associate Professor of Theatre. Mr. Nisbet recited the poem, Thrive In the Fullness of Light, which was written by his close colleague Dr. Roberts, to the students. He urged them to thrive because they are uncommon and to follow their dreams. After a few words from the University Provost, the university anthem was sung by the students and a select ensemble who were conducted by Martha Shaw, the Professor of Music.

After the university anthem had been sung the University President, Dr. Kina S. Mallard, introduced the Keynote speaker for the night, the Reverend Thomas Alonzo “Lonnie” Lacy. Reverend Lacy is an alumnus of Reinhardt University and he was the one who wrote the original draft of the Honor Code that the class of 2023 signed. Reverend Lacy told the students about how he was led to Reinhardt and how he felt that God had led the class of 2023 to Reinhardt as well. He explained to the students that the Honor Code was put in place to not only promote academic integrity but to encourage students to treat one another like family. As Reverend Lacy finished his address he made the class of 2023 a promise: he promised them that no matter what, they would be loved.

As Reverend Lacy left the podium, Mr. Teague asked that the students rise in order to recite the Honor Pledge and to be inducted into Reinhardt University. They remained standing for the singing of the Alma Mater, the Benediction, and the Recessional. With the ceremony completed, the Reinhardt faculty began to file out of the theatre. The students, however, remained in their seats because they still had to gather on the stage for their class picture. After their class picture had been taken, the students left the Falany Performing Arts Center among applause from their family and friends.

The Reinhardt University New Student Induction Ceremony is an event that symbolizes the beginning of a student’s college career. It can be difficult for students to leave home and become immersed in a new world, but Reinhardt has done an amazing job of making their students feel comfortable. Every year the ceremony gets better and better and one can’t help but be excited to see what’s next.