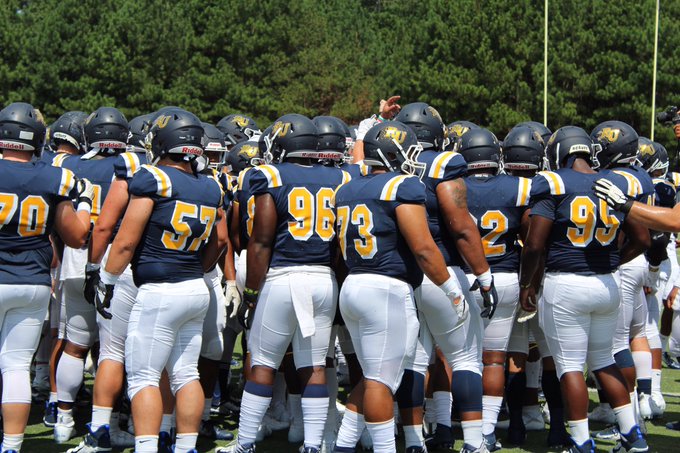 WALESKA, Ga. — The 10th-ranked Reinhardt Eagles began the season with a victory over the visiting Webber International Warriors 16-6 ending with 4:07 left in the fourth quarter. The Eagles win their season opener after falling flat to Bethel a year ago. On the other side, Webber International is handed their first loss in week one after making it to week five without a loss in 2018.

Reinhardt’s offense moved the ball well early on during their first drive, but eventually stalled at Webber’s 48-yard line and were forced to punt. The Eagles’ defense gave up a mere two yards on the Warriors’ first drive, forcing another punt after a three and out. Reinhardt’s next drive took them all the way to the Webber six-yard line, but a holding penalty negated a would-be Eagle touchdown. Alex Hardy’s 26 yards field goal gave the home team an early 3-0 advantage. Defensively, the Eagles continued to dominate throughout the first half, holding the Warriors to less than 100 yards of total offense. Webber International was unable to get past the 30-yard line in the first half, as they were stymied by a physical Reinhardt front line and an athletic secondary. Offensively, the Eagles were able to drive the ball against the Warriors, but were unable to score due to crucial mistakes. Turnovers, missed field goals and penalties doomed the offensive attack, leaving them only three points to show for an otherwise strong first half.

In the second half, the Reinhardt defense continued their strong play, with DB Sidney Hamm coming up with an interception on the third play of the third quarter to give the Eagles excellent field position on their next drive. This time, they were able to punch it into the end zone, as RB Montralius Mosely punched it in from nine yards out, pushing the Eagles’ lead to nine. Down by two possessions, the Warriors had their finest drive of the day to that point, converting three consecutive 3rd downs to get the ball into Reinhardt territory. But a penalty would push them back on 4th and 1, and they were forced to punt. The teams would then trade three and outs for the remainder of the third quarter.

Into the fourth quarter, the Eagles had a very efficient drive, imposing their will on the ground. They would go 65 yards down the field, with the drive concluding in a four-yard TD run by RB M’Calun Lanier. Webber would have an answer for the Eagles, as they would have their first TD drive of the day, going 80 yards to the end zone. They converted on critical 3rd downs with timely QB runs and effective passing. They would reach the end zone on a 10-yard pass from QB Cody Braden to WR Jeremiah Lucas. However, they couldn’t trim the lead to eight, as Reinhardt DB Jacorris Lamar broke up the Warriors two-point conversion pass, keeping the score at 16-6. Reinhardt prepared to answer back with another scoring drive, began to get in a rhythm offensively, getting the ball to the 30-yard line with 4:07 left, when the game would be called due to lightning, giving Reinhardt the 16-6 victory.

Reinhardt outgained Webber 355-160, and a staggering 275-4 on the ground. RB Montralius Mosely paced the Eagles with 70 yards rushing on 12 carries, and RB Trevae Cain and QB Billy Hall each added 54 yards rushing. DE  JT Graydon led the Eagle defense with 2 sacks and 2.5 TFLs. DE Matthew Prather and DB Satchel Crawford both added four tackles, with Prather coming up with a sack.

Reinhardt will have a bye week next week before hosting Pikeville in their next game on September 7. Webber International heads back home to face Middle Georgia on August 31.