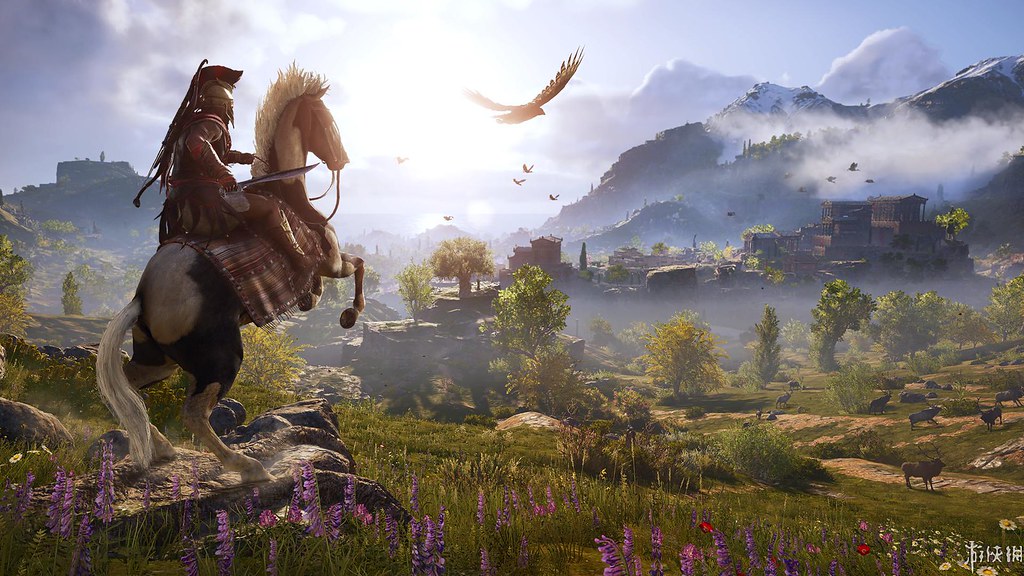 Assassin’s Creed video games have been along for many years and are loved by millions of gamers around the world. The video games revolve around two groups; the assassins and the Templars. Each group wants to be able to control artifacts of a former, more powerful, civilization named the Isu. The Templars want to use the artifacts for power and to control the world, while the assassins want to keep the artifacts safe and away from humans. The series shows different generations of the two groups throughout history. The players always play as a different character of the assassins. The newest game in the series is called Assassin’s Creed Odyssey which takes players through Ancient Greece right before the Peloponnesian War. The players can choose to play as Alexios or Kassandra. The storyline will remain the same with either character the player chooses.

The story of the game begins with an orphaned Spartan child who was thrown off a cliff in Sparta while trying to save their younger sibling from being thrown off a cliff. Accidentally pushing a priest off with their sibling, the player is accused of murder and is thrown off the cliff as well. The player survives the fall and meets a man named Markos on the island of Kephallonia. The player then grows up to become a strong mistios, or mercenary. All the player has from their former life is memories and a broken spear from their mother. The characters in the game are the grandchildren of the Leonidas, legendary general who died during the Persian War. The player goes through life as a mercenary and is trying to make a name for themselves.

Assassin’s Creed Odyssey came out on October 5, 2018. This game was highly anticipated by fans. This game is the first open-world server for the series and it allowed players to make choices in the game. The player can choose to be a kind and compassionate character, or they can choose to be violent and feared by the people. The choices the player makes can affect the ending of the game. There are multiple endings to the game, which makes in-game choices have a butterfly effect. The open-world server is also new to the series and is a rare feature to find in games. I found the graphics of the game breathtaking. The version of what the animators thought Ancient Greece looked like is absolutely beautiful. Each player is given a horse and a boat to travel around the map. The view from the boat as well as the horse lets the player see everything around them. There were some moments during the game I stopped on a cliff just to admire the view. Each player playing the game can have a different experience, this game was a test for future Assassin’s Creed games. Ubisoft did an amazing job with the new features.

The gameplay is fairly simple to understand and to master. I played the game on an Xbox One and the controls were very simple and easy to understand. More controls were added as the story continued, but they were added at a slow enough pace for me to be able to incorporate into my playstyle. There are two different game modes players can try out. The first is new for the series. The player is given a general area of where the objective is. The player then must go and find the objective without help from a map waypoint. The other game mode is the normal mode most videogames use. The map shows a waypoint where the mission continues. The player can change the game mode at any point during their game as well as the difficulty they would like to play at. I played the normal method to get used to the game and the map, but as soon as I felt comfortable, I was able to switch to the new game mode to give me more of a challenge.

The storyline of the game is very well thought out. It took me over sixty hours to be able to complete the main storyline. The story is compelling and keeps players wondering what is going to happen next. The player must complete quests and side missions to be able to reach different levels. The higher the level, the more challenging quests the players can complete.

While going through the games, the player can loot enemies and chests to gain higher gear and gain money. To complete quests and the main story, the player must upgrade gear and armor throughout the game. It is fairly simple to find the best gear in the game. The main storyline will give strong armor and weapons after completion. After the player completes the game, there are still many things to do. They can become the toughest mercenary, look for more weapons, find everyone in the Cult of Kosmos (the Templars under a different name), complete all side missions, and much more. The game has endless options after the main story is completed. Another option is the new gameplay mode called New Game+. The new mode lets the player restart the game, but is able to keep all the weapons, armor, horses, ship upgrades, and level while starting a new game. Since the game allows different endings, the New Game+ allows players to test different endings that they were not able to see the first time playing.

Assassin’s Creed Odyssey is a game that many fans were excited to see. They were promised an open-world server, choices for their character, a choice of a female or male playable character, beautiful graphics, and an accurate perception of how the world looked in Ancient Greece. The game was able to achieve all of the above in a way no one has ever seen before. The time period shows the story that happens prior to all of the Assassin’s Creed games in the past. The story is interesting and easy to follow and allows the player to decide how he or she wants to play. This game has many people excited about what Ubisoft has to offer for the upcoming game. I personally adore this game and would recommend it to anyone who has a love for storyline games or a fan of the Assassin’s Creed universe.