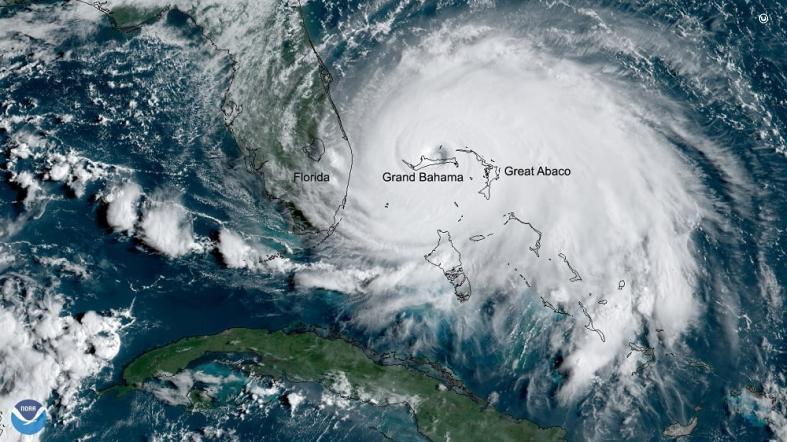 Do you ever wonder how hurricanes get their name? “The World Meteorological Organization develops a list of names that are assigned in alphabetical order to tropical storms as they are discovered in each hurricane season”. This means that names are given to tropical storms and classified as a hurricane if the storm reaches a wind speed of 74 miles per hour. Moreover, names can be repeated in an interval of six years but if the hurricane caused massive death and destruction, like Hurricane Katrina that occurred in 2005, then the name is removed and not used anymore. This is no exception for Hurricane Dorian. In like manner, CBS News states, “Dorian became a hurricane August 28, hit the Virgin Islands, brought catastrophic damage to the northern Bahamas, then briefly made landfall over North Carolina’s Outer Banks as it moved up the U.S. seaboard on its way to Canada”.

Firstly, World Vision claims that the hurricane “…Dorian formed on Aug. 23, strengthened to a tropical storm on Aug. 25 and became a hurricane on Aug. 28.” Experts say that Dorian is the biggest hurricane registered in the year. Moreover, it has reached category 5 for its capacity for destruction and strength. Also, several meteorologists have cataloged it as one of the most intense and potentially catastrophic. “Dorian entered the eastern Caribbean Sea on Tuesday, Aug. 27, triggering hurricane and tropical storm warnings for both Puerto Rico and the Dominican Republic on the island of Hispaniola. The storm strengthened to a hurricane on Aug. 28 as it pounded the U.S. and the British Virgin Islands”. For this reason, a notable amount of people that reside in these “danger zones” have already evacuated, some have taken shelter in churches and schools.

Dorian’s path continued “skirting the east coast of Florida and Georgia the storm impacted South Carolina and North Carolina, including areas that were badly affected by 2018’s Hurricane Florence. On Thursday, Sept. 5, Dorian spawned more than a dozen tornadoes in North Carolina. The slow-moving storm made landfall on North Carolina’s Cape Hatteras Friday morning, bringing heavy rain and high winds”. Finally, “The long saga of Hurricane Dorian ended with a bang on Sunday, Sept. 8 as the destructive storm made landfall in Nova Scotia, Canada, knocking out power to hundreds of thousands of people before dwindling and dissipating offshore”.

The aftermath of Dorian left great devastation in the northern Bahamas since “It obliterated everything in its path, including thousands of homes, and left some 70,000 people homeless”. Also, Dorian’s worst damage in the US happened on Ocracoke Island. CBS News states, “Residents who waited out the storm described strong winds followed by a wall of water that flooded the first floors of many homes and forced some to await rescue from their attics”. Consequently making landfall near Sambo Creek, Nova Scotia, Canada leaving more than 300,000 people without power in parts of Halifax, Prince Edward Island and New Brunswick.

Judging from the devastation, the name Dorian will most likely be removed from the World Meteorological Organization list of names for hurricanes. Fortunately, many organizations have helped provide relief to people affected and slowly recovering from this catastrophe.