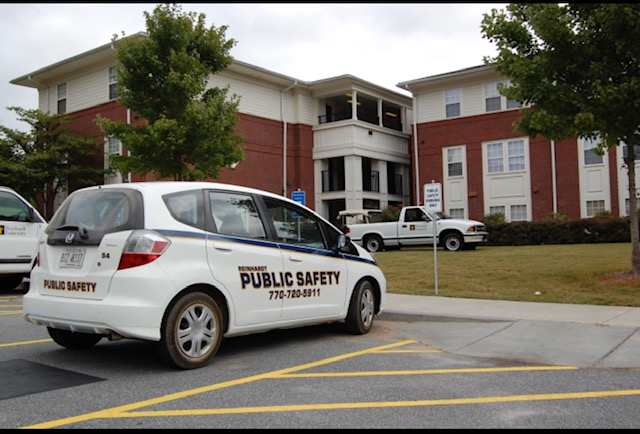 WALESKA, Ga.— On both September 25 and 27, Reinhardt’s first-year students met in the library to learn about what they should be prepared to do if an active shooter is on campus. There has been an alarming amount of school shootings in the past couple of years. In the past, there was a plan that everyone followed where they would hide in plain sight. The government realized that their first plan was not working so they came up with a new system. There was a lot of compromising that occurred, but eventually an agreement was reached.

The presentation was given by Public Safety Officer Rhonda Kelley, an Assistant Director of Public Safety. She began by letting students hear the 911 call made by Patti Nielson1 from the library, during the Columbine High School Massacre on April 20, 1999. The room fell quiet as the students listened to the teacher in the phone call freak out and try her best to keep her students safe as gunshots went off in the background. The audio ended abruptly after the teacher told the 911 operator that the shooter had just entered the library that she and her students were hiding in. Officer Kelley continued by telling the students that she and her team had gone to active shooter training at a school in a surrounding county. There they learned about the procedures that they should follow if a situation ever presented itself.

The FBI implemented a new program named ADD: Avoid, Deny and Defend to help civilians increase their chances of survival, especially if they ever had the misfortune of finding themselves in an active shooter situation. The first thing we were taught to do is to avoid suspicious people at all costs. If you have the chance, either leave through primary exits or lock yourself somewhere safe and call the police. If you can’t avoid the attacker, then try your best to deny them access to your location. You can do this by barricading doors, turning off lights, and standing up against the wall closest to the door so you can’t be seen. If all else fails and there’s no way to avoid or deny the attacker, then you are going to have to defend yourself. When fighting the attacker, all rules should go out the window because this person is trying to end your life. Fight dirty because it is your right to defend yourself.

The average time that it takes for law enforcement to arrive on a scene is three minutes, and you must follow their instructions. They may not help you at first because their top priority is to stop the danger. After the threat has been contained, paramedics will come in and help those who need medical attention, so until then, you should stay in place. As tragic as shootings are, there isn’t anything we can do except be prepared. If you follow ADD, then there’s a good chance that you’ll survive and be able to live another day.