No. 2 Marian defeats No. 13 Reinhardt in NAIA Playoffs 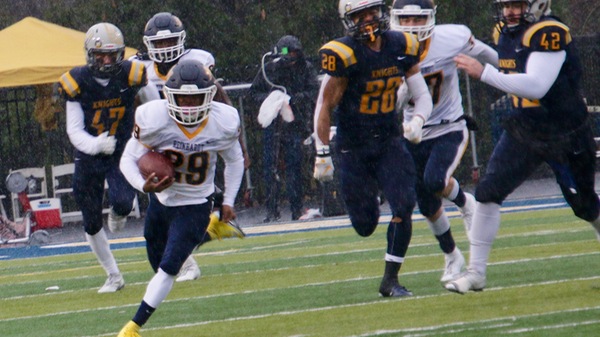 The second ranked Marian Knights (10-0) enjoyed a perfect regular season entering NAIA Playoff play, and their good fortune has continued deep into November with their first round victory over No. 13 Reinhardt (9-3). The Eagles will bow out of the playoff field in the first round for the second season in a row, while the Knights will make their first appearance in the National Quarterfinal since the 2016 season.

The game started off with a bang for Reinhardt when RB Otis Odom returned the opening kick off 92 yards for a TD, creating an immediate momentum swing. The Eagles continued to take the fight to Marian by intercepting Knights QB Ethan Darter on each of their first two possessions, with one of them being returned by DB Jalen Everett down to the 3 yard line. However, due to turnovers and penalties, Reinhardt was unable to take advantage, keeping the score locked at 7-0. Late in the 1st, Marian got on the board on Darter’s pass to WR Johnny Williams, knotting the game at 7-7 going into the next frame.

Both teams would use their strong defenses to play the field position battle in the second quarter, with each trading three and outs until Reinhardt found some success midway through the first. However, Marian’s defense would hold tough, holding the Eagles to a 38 yard field goal attempt that was missed. The Knights would control the clock for nearly the remainder of the half, ending their drive with a 20 yard field goal from K Matt Plesac to take a 10-7 halftime lead.

The third quarter would be more of what was seen in the second, with both defense holding strong to keep the potent offenses in check. Reinhardt, one of the country’s best rushing teams, was held to just 84 yards on 40 carries, well below their season average. Marian would accumulate yards on the Eagles’ defense, but the group would stand tall when it mattered most, bending but not breaking.

The score would remain 10-7, until Marian embarked on a back-breaking drive against a winded Reinhardt defense. They completed third down after third down, wearing out the Eagles with physical running and quick passing. When the Eagles forcing Marian into a 4th down situation later in the drive, the Knights didn’t flinch, as they converted the 3rd down on an Ethan Darter pass to WR TJ Reed to effectively put the game on ice. Reinhardt would get the ball one last time, attempting to drive down field for a quick score. However, their drive would stall out at their own 37-yard-line. Marian would run out the clock to win the game, 17-7.

Marian dominated the yardage totals during the game, out-gaining the Eagles 335-89. Reinhardt was only able to accumulate 5 yards passing, a credit to a tough Marian defense. Reinhardt held Marian well below their season average, forcing them into their lowest scoring outing all season long. Reinhardt will finish their season at 9-3, while Marian will continue their season next Saturday against University of Cumberlands.