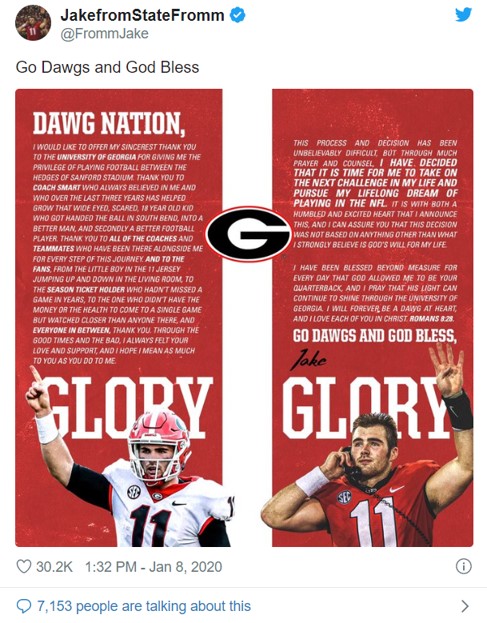 Jake Fromm, former UGA Bulldogs quarterback, tweeted on Twitter Jan. 8, 2020: “I have decided that it is time for me to take on the next challenge in my life and pursue my lifelong dream of playing in the NFL.” Fromm has been a quarterback for the Georgia Bulldogs since 2017, when he won the SEC Championship against Auburn that year. Fromm was seen on Jan. 13 in Mobile, Alabama, training with David Morris, founder of QB Country, while LSU was playing Clemson in the College Football National Championship game.

Fromm ended his college career a year earlier than anticipated, choosing not to finish out his senior year in order to join the 2020 NFL Draft.

With Fromm leaving the Bulldogs with no experienced quarterbacks for the 2020 season, they will have an empty hole for someone to fill his shoes. The Bulldogs had already lost their top juniors to the NFL: offensive tackles Andrew Thomas and Isaiah Wilson and tailback D’Andre Swift also joined the NFL 2020 draft.

According to the 2020 NFL Mock Draft by USA Today, Jake Fromm is expected to be in the top 50 of the draft and is expected to be the 23rd pick by the New England Patriots.The other top 50 picks predicted from the Bulldogs on the mock draft include Andrew Thomas, 4th pick to the New York Giants, D’Andre Swift, 18th pick to the Miami Dolphins, Solomon Kindley, 31st pick to the Kansas City Chiefs, and Isaiah Wilson, 42nd pick to the Jacksonville Jaguars.

College football players had until Jan. 20 to determine if they wished to enter into the 2020 NFL Draft. It is unknown what kind of season 2020 will bring for the Georgia Bulldogs, with new players filling the positions on the team. The NFL has a lot of talented young college players attempting to be drafted this year, and it is likely that Jake Fromm will be drafted along with many of his teammates.