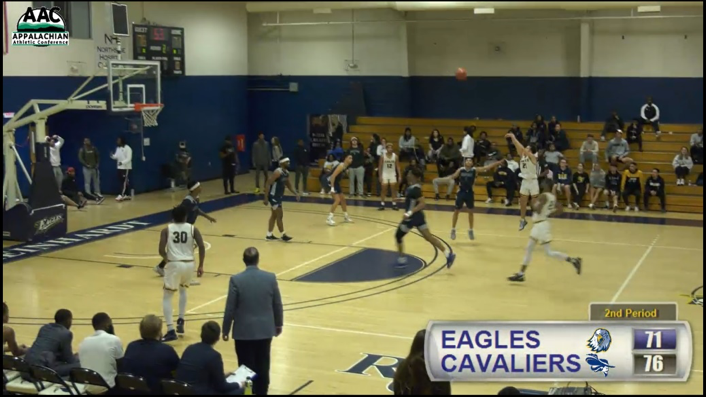 Story and photos by Jon Licht

The Reinhardt Women’s Basketball Team played Montreat on Wednesday night, Feb. 19. The team played aggressively all four quarters while keeping a lead just ahead of Montreat in each quarter. The team is second place in the Appalachian Athletic Conference (ACC) with 21 wins and two losses in the conference. It has had a victorious season, with 24 wins and 4 losses total. On Saturday, Feb. 22, the team played its last regular season game against Allen University, winning 77 to 70. Reinhardt’s Director of Athletic Communications & Media, Mike DeVader, reported, “Reinhardt women’s basketball overcame a slow start on the road at Allen (S.C.) on Saturday afternoon and exploded in the final 20 minutes with a 45-27 second half to end the regular season with 14-straight wins, 77-70, over the Yellow Jackets.”

DeVader quoted Head Coach Toby Wagoner, who said, “These ladies amaze me more and more every day. It’s mentally, physically and emotionally hard to sustain all they experience as students-athletes and they keep getting better. It’s not always pretty but it’s not always ugly either; they keep fighting and pushing forward. The attitude, character and work ethic are off the charts. Seriously, this team is a group of winners that doesn’t know anything different, and the best part, is having a front-row seat to watch them.”

The Reinhardt Men’s Basketball Team had an upsetting loss in overtime to Montreat on Wednesday night. In the second half with 10 seconds left to go, it looked like it was going to be a loss for the team. The men kept up the fight to the very end, and in the last 10 seconds, Blake McIntyre scored a long-distance 3-pointer, getting Reinhardt two points away from a tie. With less than a second left, Jervon Walker was able to put the ball back in after a missed attempt to score the two points to tie the game 80-80. In overtime, the team fell short as the clock ran down to zero, ending the loss 90-85 to Montreat.

The men’s team went on to play Allen University Saturday but faced a disappointing loss in its final game of the season, 65-80.  “The contest got away from the Eagles in the second stanza,” Mike DeVader reported, noting that some players excelled on the court. “The brightest star on the court for the hometown squad was Chris Rogers and his 20 points on 8-for-10 shooting and nine rebounds. Jamison Syphore got the start and had 15 points and nine boards as well, as Reinhardt finished at 37.1 percent from the floor (26-of-70) and made just 7-of-18 from the charity stripe. Josh Daniels also added eight points to go along with his nine rebounds and three dimes.” The graduating seniors of the Reinhardt men’s and women’s basketball teams as well as the senior cheerleaders were honored on Feb. 19, in the time between the women’s and men’s basketball games. The senior men and women were each given the jersey they played in. The Reinhardt senior men received their jerseys, the senior women received their breast cancer awareness jerseys, and the cheerleaders received a shadow box with their bow, pompom, and other items along with gifts from friends and family. These seniors will forever remember the moments from their college athletics as this season is coming to an end. Soon, new players will follow in their footsteps to continue to bring Reinhardt University Eagles the passion and dedication that each of these graduating players has put into their athletics.