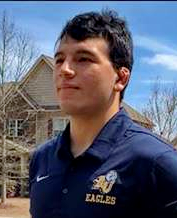 We hope you had the opportunity to vote and have your voice heard as we voted for the new Student Government Executive Board! As some may know, we announced the winners yesterday in celebration of Spring Day via Facebook Live but we wanted to show you who you, the Student Body, voted for. Here are your winners: Luis is a sophomore English major who has served this year on the Student Senate. He looks to make Reinhardt better than he found it. He wants to make a real impact and positive difference on campus. Jordan is a junior marketing major who has served on Student Senate this year as the sorority life chair.  She is the current Zeta Tau Alpha President and wants to ensure students have a voice on campus and help continue to make Reinhardt a wonderful place for students and the community. Reagan is a sophomore early childhood education major who has served on the Student Activities Council for the past two years and on the Student Senate this year. She believes that students should have a say in the events that are brought to campus.  She also hopes to continue the events students love. Kim is a sophomore, business administration major with a concentration in accounting who has served as the student body at large representative on the Student Senate this year. She hopes to keep all budgets in line and up to date for the students. Amber is a sophomore, creative writing major who has been a part of SGA for two years now and has been re-elected in her secretary position. She hopes to continue to make Reinhardt a place everyone loves.

Thank you all for your votes and for allowing your voice to be heard! We hope you are all staying safe and adapting to this new way of life. We know it’s tough but we as SGA hope to show some light and help in any way we can to voice your concerns and be the voice of the students.