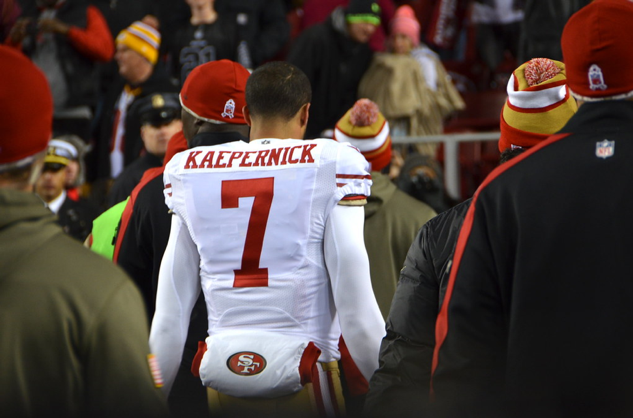 The same day, a Cleveland television station, FOX8, also reported the story, later retracting it on their Twitter account, stating that the news was false. FOX8 quickly published a new article headlined “Parody ‘SportsCenter’ account falsely tweets Colin Kaepernick signed” and redirected traffic to an updated article. The revised article noted that “There is no official reporting from the real SportsCenter account or other verified news sources about any team signing the athlete.” Though it was “fake news,” there may be some truth to the rumor.

According to TMZ Sports, “Colin Kaepernick has NOT been signed with the NY Jets, as fake reports suggest, but he is reaching out to the team in hopes of landing a deal, TMZ Sports has learned. Colin’s name was trending on social media on Thursday thanks to a bogus report that CK inked a 1-year, $9 million deal with the Jets. It’s unclear if the feeling is mutual, but the Jets don’t really have a lot of depth behind Sam Darnold at the QB position, so it’s not a crazy idea. TMZ sources say Colin has continued to work out and train like a maniac ever since his NFL workout back in November, where he told teams to ‘stop being scared’ and make an offer already.”

The Jets had a bad season in 2019, and fans believe that Kaepernick would be a great asset to the organization and could better the team’s stats.

Kaepernick was a successful quarterback for the San Francisco 49ers. He played with them for six seasons, and at the end of his career, he had thrown for 12,271 yards to go along with 72 touchdown passes and 30 interceptions. He also rushed for 2,300 yards and made 13 touchdowns. In 2016, his career took a hit when he received backlash for kneeling during the National Anthem to bring awareness to the issues of racial inequality and police brutality in the black community.

Despite being a free agent, Kaepernick never left the public eye. In 2018, Nike made a social and political statement by featuring Kaepernick in their 30th anniversary “Just Do It” ad campaign. Kaepernick tweeted, “Believe in something, even if it means sacrificing everything.” The campaign sent social media into a frenzy.

In 2019, Nike was set to release a Fourth of July sneaker. Unfortunately, the campaign was bust. Kaepernick advised the company not to release the $140, limited-edition sneaker because The Air Max 1 Quick Strike featured 13 white stars in a circle, referencing a Revolutionary War-era version of the American flag (commonly known as the Betsy Ross flag). This early version of the flag, he argued, is pulled from the era of slavery and doesn’t warrant celebration.

In 2019, Kaepernick tried to make a comeback. He was slated to hold a private workout session in front of NFL team scouts and executives at an Atlanta Falcons training facility, but a disagreement stemming from a liability waiver, media access, and a last-minute change of location ended it all. Kaepernick ditched the NFL’s planned workout for a throwing session at an Atlanta-area high school. Because of that, the event was no longer an NFL-sanctioned workout. Per Mike Florio of Pro-Football Talk, the NFL’s liability waiver avoided a potential second lawsuit from Kaepernick if a team did not sign him.

Though Kaepernick has had difficulties with the NFL, he has repeatedly stated that his desire is to continue his career in football. He remains a Nike spokesman and an activist for change.