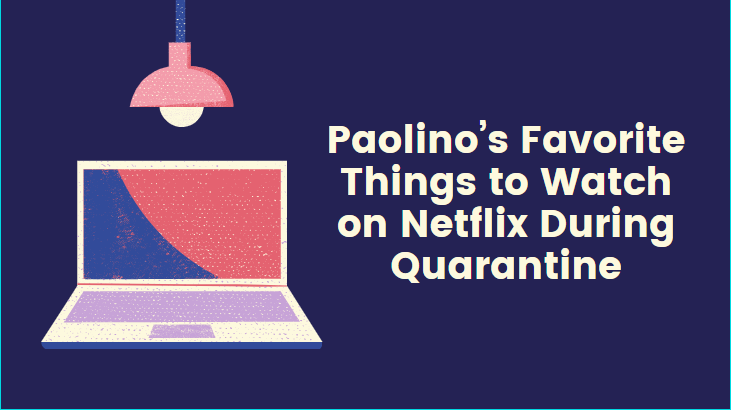 Who would have thought that an international pandemic would have all of us stuck at home? I am sure that quarantine has not been an easy task for anyone, myself included. Many of us have found ourselves with a lot of time in our hands. That is why I have created a list of my top three shows and movies to watch on Netflix during the quarantine.

Starting with shows, I have “Money Heist” in my number one position. This show is about a criminal mastermind, referred to as “The Professor,” that recruits eight other famous criminals to help pull off the biggest heist recorded in history — print billions of euros in the Royal Mint of Spain. This show had me binge-watching it because of the thrilling plot. This show is extremely interesting for me because of the Professor’s astute plan that he implements and how he manages to fix the little mistakes that come up along the way.

Next, I have the show “You.” This show is about a man named Joe who obsesses over the women that he falls in love with. He obsesses over them so much that he stalks them obsessively. Joe is also willing to kill anyone who gets in the way of his relationships. What I enjoyed about this show was how Netflix was able to portray the life of a stalker and serial killer in such a way that it’s interesting to learn about serial killer’s psychotic behaviors.

The last show is “On My Block.” This series is about four friends: Cesar, Monse, Ruben and Jamal, that live in the same neighborhood. Cesar follows his older brother’s footsteps and joins a gang. The main plot of this show is about Monse, Ruben and Jamal protecting and helping Cesar to stay out of trouble. Additionally, “On My Block” focuses on side plots and adventures that portray the drama of life.

Moving on, I have my top movie to watch on Netflix called “The Platform.” This movie is about prisoners that are quartered in vertical cells. It is important to highlight that the prisoners are given food that is placed on a platform that descends. The inmates in the upper cells are fed while those below starve.

Next, it is “Miracle in Cell No. 7.” This movie is about a father — Memo — who operates throughout life with an intellectual disability while living with his daughter — Ova — and grandmother. The plot of the movie is that Memo gets separated from his daughter when he is accused for committing a crime that he did not commi — the murder of a commander’s child. Be prepared for an emotional roller coaster. This movie will leave you happy, sad, angry and confused.

Last but not least, I have “The Invisible Guest.” This movie is about a young businessman — Adrián Doria — that wakes up in a hotel room next to his dead lover. He then hires a lawyer to defend him when he is accused of the murder. He and the lawyer work throughout the night to try and figure out what happened. This movie is great because it has an intriguing story line and an unexpected end that left me shocked.

That is all for now, I hope that all of you stay at home safely and take a look at my current top favorite shows and movies on Netflix.