Why Does Everyone Love “The Mandalorian” So Much? 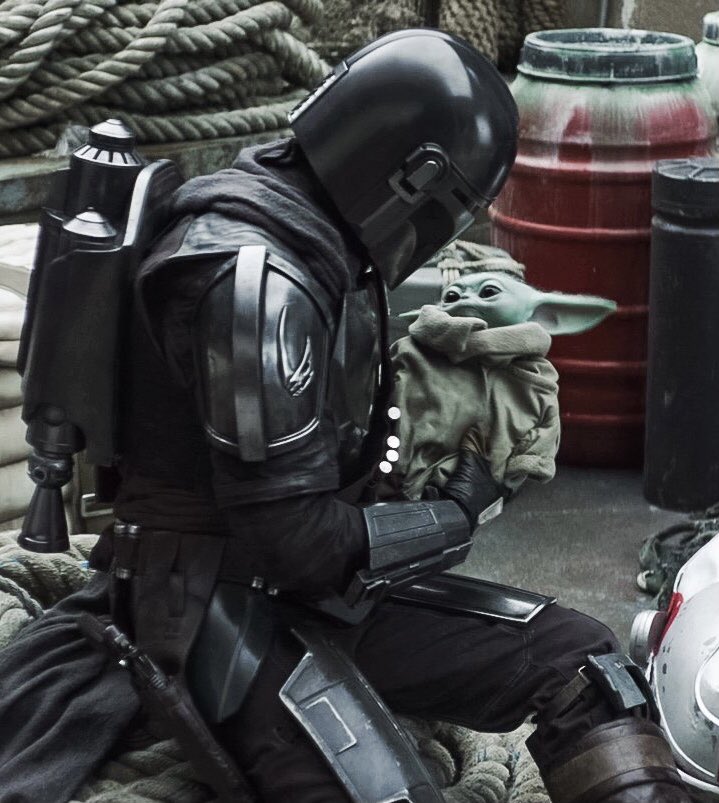 Everyone is hooked on Disney Plus’s “The Mandalorian.” Currently, in its second season, the series tells the story of a mysterious Mandalorian bounty hunter who encounters a Force-sensitive child and must protect it against the harsh, deadly, and cutthroat conditions of the Star Wars criminal underworld.

You have probably heard your friends or family raving about the show. But why is it so popular? For one, it is not just because of Baby Yoda’s extreme cuteness, or that it is an unprecedented live-action “Star Wars” series—in contrast to “The Clone Wars,” another critically acclaimed television show. No. It’s because this story is told masterfully from the very start. Its director, John Favreau (a big fan of the franchise himself) uses camerawork, editing, and characterization that differ from the way Lucasfilms produced the “Star Wars” movies. To die-hard “Star Wars” nerds (such as myself) and casual fans alike, the series offers a refreshingly dark take on a world we’ve visited countless times since 1977.

The story picks up several years after the destruction of the second Death Star in “Return of the Jedi.” Viewers experience a time in which the Rebel Alliance is now the closest thing to a governing body the galaxy has as they try to wrestle control of the Outer Rim from the clutches of bounty hunters and gangs.

The protagonist, the Mandalorian, and his young sidekick, the Child, have brilliant chemistry the moment they meet. The Mandalorian is a quiet, mysterious, gruff wanderer who initially wants nothing more than galactic credits as he ruthlessly travels across the Outer Rim and assassinates gang leaders and high-profile criminals. He refuses to take off his iconic Mandalorian helmet, which adds to his enigmatic presence.

The Child is cheery and humorous, a symbol of hope in the often–ruthless life the Mandalorian leads.

This stark contrast of personality acts as the metaphorical engine that drives the show, as the two characters learn more about each other and themselves in their grueling travels. The Mandalorian is emotionally impenetrable. A traumatic incident in his childhood caused him to be self-protective, but he has a soft spot for the Child, which allows him to reveal to the audience a side to himself that he never shows to his acquaintances and allies.

The Mandalorian’s experiences show an interesting side of the Rebels not explored in the main movies.  We see several incidents where he comes in contact with their newly formed government, and New Republic officials do not treat him particularly well—some even mirroring that of the attitudes of Imperial Stormtroopers.

The series depicts the last remaining Imperial holdouts that the Rebels did not destroy in “Return of the Jedi” as feeble and desperate, a stark juxtaposition to their previous status in the original trilogy. These two factors within the plot are examples of the massive tonal shift that the producers have implemented in the series. They lead viewers to ask themselves, “Well, now the New Republic has taken over, but we still see early signs of brutal oppression upon the common people of the galaxy. Isn’t that what the Rebels initially fought? Is there really that big of a difference between them and the Empire?”

The new perspective that these themes gift to viewers is a prime example of the reason that viewers have shown such a massive wave of interest in the show.

However, in “The Mandalorian,” Favreau and his team have implemented “Bourne Identity”–esque cinematography, in which they film scenes, especially those depicting fighting or blaster fire (or both) very close to the action in a handheld-camera style (“shaky cam”).

These methods put the audience right in the struggle, every punch landing more violently than in any other “Star Wars” media, and every blaster shot gruesomely injuring or even obliterating the target. These techniques do an excellent job of reflecting the show’s purpose of appealing to a more mature audience and giving viewers a taste of an alternate style of camerawork than what they’ve become accustomed to in the Lucas films.

In editing, a key point to note is the color grading. Instead of bright and vibrant colors, Favreau films the in darkened locations and atmospheres, with each shot containing muted and over-saturated color grading. These choices by the production team help to set the gritty, brooding tone for which the series has now become famous.

“The Mandalorian” gives fans a fresh, long-awaited take on the age-old “Star Wars” cinematic universe – a take that explores themes seldom depicted in most other forms of “Star Wars” media, a take that is mysterious, which makes the story progression even more enjoyable. That’s why fans are loving “The Mandalorian.”