My observation is that we’re all hypocrites about freedom of speech. When it comes to speech we agree with, of course we’re in favor of it. When it comes to speech we disagree with, we have all sorts of rationalizations at our disposal about why we shouldn’t have to listen; indeed, why that speech (now designated “misinformation”) should be “deplatformed” or censored, or its speakers punished. I assume that, given the opportunity, everyone would act on this principle, but of course I am most familiar with its operation in academia, where speech from the left is cherished, and speech from the right condemned. ‘Twas ever thus, and I think of it again during the fatuous Banned Books Week, which is upon us once again. Here is a Facebook graphic for this event: 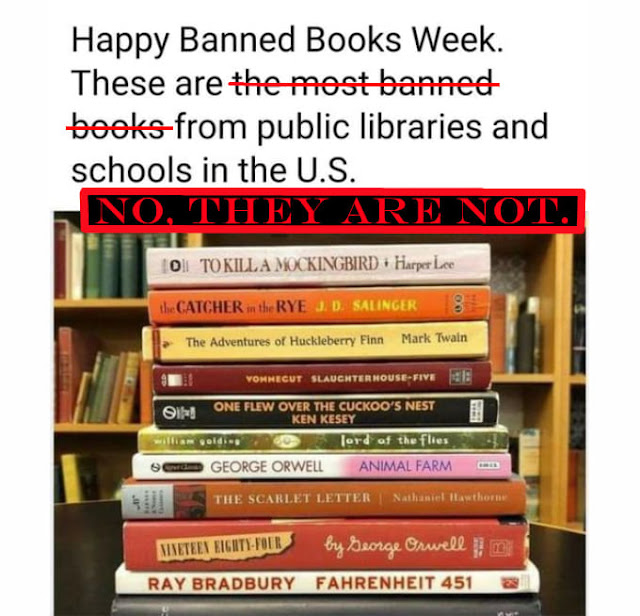 News you can use, from Snead Hearn. Guess what? Most threatened books these days are not about rebellious white men! With one exception they’re books by and about LGBTQ people that challenge gender and sexual (hetero) norms.

My genuine thanks to someone on my feed for giving me a reason to talk about something relevant and political that means a lot to me.

It IS Banned Books Week, that’s true. And that’s important! But if you see this graphic (the original, without the red cross-out and note I’ve added) being shared around… it’s wrong. And I think it’s wrong in a kind of deliberately gross way that we need to talk about.

This picture of stacked books didn’t actually come from Banned Books Week. I know that because these are not actually the top 10 most banned books anymore. THESE books haven’t been the most banned for many years. Many of you probably remember them fondly from your youth – I do too, but it was OUR youth when they were being routinely challenged. I suspect they’re being trotted out falsely as current because the current political climate makes it easy to pretend that “woke liberals” are trying to get old classics pulled off the shelves for not being with the times, buuuuuuuut (1) they aren’t, and (2) when these books WERE being banned, it wasn’t the left doing it, it was people upset by Huckleberry Finn discussing American racism, or who thought that 1984 was “pro communist”. In short: it’s never been “the libs” banning these books, y’all. (Psst: they’re usually the librarians fighting to keep the books on the shelves.)

“So which books are actually being banned *now*? Here’s the current top 10, and the reasons why, and you can read more about Banned Books Week at the link.

Reasons: challenged, banned, restricted, and hidden to avoid controversy; for LGBTQIA+ content and a transgender character; because schools and libraries should not “put books in a child’s hand that require discussion”; for sexual references; and for conflicting with a religious viewpoint and “traditional family structure”

– #2: Beyond Magenta: Transgender Teens Speak Out by Susan Kuklin

Reasons: challenged for LGBTQIA+ content, for “its effect on any young people who would read it,” and for concerns that it was sexually explicit and biased

– #3: A Day in the Life of Marlon Bundo by Jill Twiss, illustrated by EG Keller

Reasons: Challenged and vandalized for LGBTQIA+ content and political viewpoints, for concerns that it is “designed to pollute the morals of its readers,” and for not including a content warning

– #4: Sex is a Funny Word by Cory Silverberg, illustrated by Fiona Smyth

Reasons: Challenged, banned, and relocated for LGBTQIA+ content; for discussing gender identity and sex education; and for concerns that the title and illustrations were “inappropriate”

Reasons: Challenged and restricted for featuring a gay marriage and LGBTQIA+ content; for being “a deliberate attempt to indoctrinate young children” with the potential to cause confusion, curiosity, and gender dysphoria; and for conflicting with a religious viewpoint

– #6: I Am Jazz by Jessica Herthel and Jazz Jennings, illustrated by Shelagh McNicholas

Reasons: Challenged and relocated for LGBTQIA+ content, for a transgender character, and for confronting a topic that is “sensitive, controversial, and politically charged”

– #7: The Handmaid’s Tale by Margaret Atwood

Reasons: Banned and challenged for profanity and for “vulgarity and sexual overtones”

Reasons: Challenged for LGBTQIA+ content and for concerns that it goes against “family values/morals”

Reasons: Banned and forbidden from discussion for referring to magic and witchcraft, for containing actual curses and spells, and for characters that use “nefarious means” to attain goals

There are exceptions, but speaking by the numbers (“most banned” is the name of the meme, after all) it isn’t folks on the left who ban books in America. It’s a GOOD thing to care about, but caring means actually knowing what you’re talking about.

And if you *agree* with *these* bans, the ones actually happening now… maybe think about that a minute.

Most of the books pictured in the graphic aren’t even in the Top 100 anymore, and none of them is in the Top 10. Which is great! People aren’t banning these anymore. But we should be upset about what they *are* banning *now*. So feel free to use this post and these links to challenge misinformation and support some books that are actually, currently under threat.

I refer you to an earlier post of mine about Banned Books week, and my criticism still stands: what does it mean for a book to be “banned”? Forbidden by federal law like meth? Or just removed from the shelves of your local public library?* Oh dear – I guess we’ll have to order it from Amazon then! Thankfully, all of these books are available on Amazon (I checked), so even if the squares in your town have succeeded in getting My Princess Boy pulled from the shelves of the library, you can still buy it over the Internet for the price of two packs of smokes or five Monster energy drinks.

But you know what you can’t buy on Amazon? F. Roger Devlin’s Sexual Utopia in Power, Roosh V’s Game, or Colin Flaherty’s Don’t Make the Black Kids Angry. All of these were available, and then all of a sudden they weren’t (and something tells me that you won’t be able to find them at the local library either). Now, you could say that they’ve been removed for a good reason – to which I reply, maybe so, but I don’t want to hear anything from you about “banned books.” Just come clean and say yeah, we’ve taken a side. A poignant coming-of-age YA novel about a transgendered teen is simply better than a “red-pill” book about the allegedly true nature of women, according to this standard. One deserves protection and promotion, the other condemnation and erasure.** That’s fine, but don’t complain about “the left” being unfairly tarnished as “book banners.” If anything, it’s the left that desires the removal of Huckleberry Finn on account of That Word, the left that does not like 1984 on account of its bleak portrayal of Communism, and the left that wants the removal of Harry Potter, not on account of witchcraft and spells, but because of J.K. Rowling thinks that trans women aren’t really women.

But if there is anyone concerned with censorship and Free Speech in the abstract, then libraries are not the places to look. Libraries have finite space and cycle books in and out all the time – besides, books are a dead medium! Instead, let us concern ourselves with immense power of Big Tech, which is far more relevant and pervasive.

* And what does it mean for a book to be “challenged”? A request that it be removed from the shelves for reasons of content? Whoa… that’s serious!

** I realize that my original argument now applies to me: these books have not been “banned,” and if you can’t buy them from Amazon, then buy them somewhere else. This is true, although I can’t help but notice places selling this sort of thing tend to get their ability to process credit card payments yanked, which is indeed getting pretty close to “banning.”