In late December I recommended one of my favorite recent books off my reading list – recent in this case meaning when I read them, not necessarily when they were published. That was Empires of the Word: A Language History of the World by Nicholas Oster. (You can see my review and recommendation here.) I’ve been casting about since and in the last week I’ve finally found a book on a related topic that has captured my interest: The Writing Revolution: Cuneiform to the Internet by Amalia E. Gnanadesikan. But what really prompted me to write this post was this poster I saw on Jason Kottke’s site. 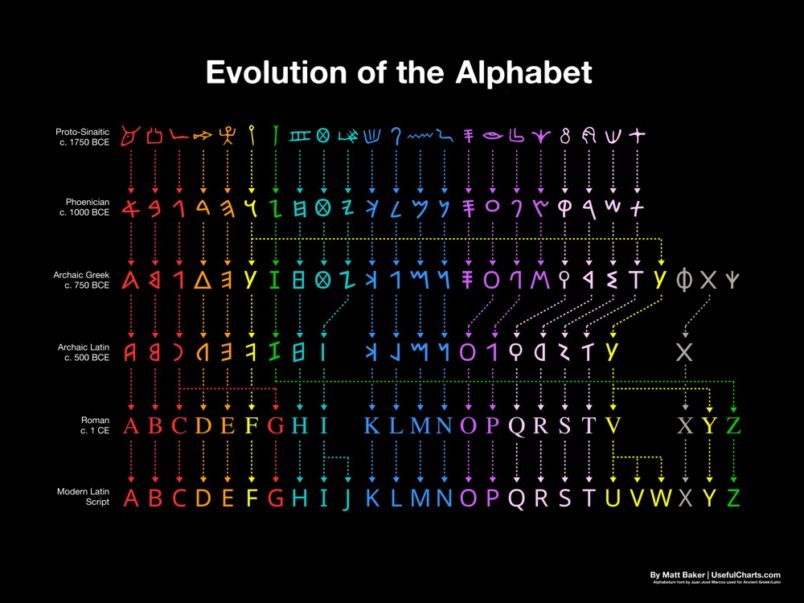 (You can purchase the poster here from a place called usefulcharts.com.)

As you can see, the poster traces the evolution of our modern Latin alphabet back to what is known as Proto-Sinaitic. All of this is prologue to my current fascination with the history of writing.

Language is not an invention. As best we can tell it is an evolved feature of the human brain. There have been almost countless languages humans have spoken. But they all follow certain rules that grow out of the wiring of the human brain and human cognition. Critically, it is something that is hardwired into us. Writing is an altogether different and artificial thing.

Since we live in a highly literate culture, it can be a bit hard not to think of writing as just a different version of language – there’s the sound version and the written version. But again, there’s nothing natural about it or inevitable. Indeed, the invention of various scripts that can encode virtually all the potential meaning of human speech and as well as it sounds is one of the most fascinating stories of human history.

More at the link. Marshall is right. A recent question on an exam asked students to identify and state the importance of language. The correct answer is that language allowed Homo sapiens a massive competitive advantage over other hominins (indeed, over every other living creature, and over the elements as well). Language is more than, e.g., a particular shriek that indicates the presence of a snake. Language is a particularly complex system of communication that allows its possessors the ability to imagine counterfactuals, e.g. what would happen if we tried this? As far as we can tell, no other creature can do this, certainly not to the extent that Homo sapiens can. Animal behavior might be sophisticated, but it is generally instinctual, evolved over millions of years.* It would never occur to a bird, for instance, to put a roof over its nest.

Most of the answers on the exam, however, spoke of language being invented in Sumeria c. 3000 BC, and impressed into clay tablets, which allowed good record keeping and as a bonus gives historians today some idea of what ancient Sumerian society looked like. But as I wrote in the margins more than once: “Language ≠ script!”

If I correctly recall the material from an undergraduate anthropology class, the linguist Noam Chomsky is largely responsible for the notion that language is a part of us in the same way that our livers are. There is a language module in our brains (a “Universal Grammar,” in Chomskian coinage) that gets turned on at a certain age based on whatever an individual happens to hear.** This theory makes a great deal of intuitive sense, even if we haven’t yet located any language center. Encoding language phonemes as writing, however, is not at all natural – it is an achievement of civilization and must be taught to people at great effort over many years. And it’s not just learning what letters represent what sounds, or combine to make what words: keep in mind that as much as 70% of face-to-face communication involves intonation, facial expression, or body language, little of which gets represented in writing (one of the reasons why, historically, people were suspicious of it). This is why a transcription of a conversation or an impromptu speech often reads so awkwardly, and why polished literacy usually involves the mastery of certain prose conventions that help to overcome the inherently limiting qualities of script.***

In the Middle Ages, as Michael Clanchy states in his well-known book From Memory to Written Record (1993), literacy was a technical skill, like IT might be today – you need people to do it, but there’s no reason why a manager should have to set up his own computer network; he has better things to do. And if literacy was technical, then medieval people tended to distrust documents in a way that we don’t anymore. A document was often just as a disembodied text that anyone could have written. It was much better to hear something from someone trustworthy, who heard it from someone trustworthy, who heard it from the source. The line of human transmission guaranteed the authenticity of the information. Along the same lines, there is a famous story about how John de Warrenne, earl of Surrey, when asked by King Edward I to justify by what warrant he held his estates, drew a rusty sword and declared that:

My ancestors came with William the Bastard, and conquered their lands with the sword, and I will defend them with the sword against anyone wishing to seize them.

In other words, no document needed here! Clanchy himself warns against being biased in favor of literacy, if for no other reason than non-literate people tend to have much better memories than any of us do (or even just linguistic skills – I met a man in Egypt who could not read any language, but who had acquired the ability to speak fluent English by talking with tourists). Literacy can also be a tool of centralized coercion, when you teach people how to read, and then make sure they read only things you approve of.

Finally, and to return to the theme of Marshall’s post, the Roman alphabet actually doesn’t fit English all that well. One wishes that we could have an alphabet in which every phoneme gets its own unique character, or at least a standard combination of characters – and that our eccentric English orthography could finally be rationalized. But I suppose on another level that it’s good that we share an alphabet with so many other languages, and that in each case the letters represent more or less the same sounds – it makes learning French, German, Estonian, Welsh, or Turkish that much easier (that is, if you’re like me and have become addicted to script).

* I am aware of stories about how corvids can bend a wire and then use it to extract an object from a bottle, or how octopi can figure out how to open screw top lids on jars, or even how pods of killer whales can invent adaptive behaviors and then communicate them to their young, demonstrating a form of animal culture. But as I read once, in response to the claim that man is not the only tool-making animal: “Using a blade of grass to extract ants from an anthill is not a tool. The internal combustion engine is a tool.”

** Tom Wolfe’s Kingdom of Speech (2016), his last published book, deals with the possibility that Universal Grammar might not be entirely universal. The missionary-turned-linguist Daniel Everett claims to have discovered, in the Pirahã people of the Amazon rainforest, a language that does not include recursion (e.g. the Pirahã are incapable of formulating a sentence like “he said that she would come”), thereby undermining a key feature of human language as understood by Noam Chomsky. Being Tom Wolfe, he focuses very heavily on the status to be won by defending one’s own theory or exploding someone else’s, but one question that he doesn’t seem to consider is: is it possible that recursion fell out of use among the Piranã people due to their isolation plus genetic drift or even revealed maladaptability, in the same way that penguins lost the ability to fly or certain cave dwelling creatures lost the ability to see? That is, Universal Grammar might indeed exist, it’s just that some people don’t need it and so have lost it – it’s not that UG never existed in the first place. Snakes are considered tetrapods even though they don’t have any limbs – their ancestors did once upon a time, but in the meantime the animals evolved a different means of locomotion. (Or they were cursed to crawl about on their bellies, if you adhere to Genesis 3.14.)

*** This is parallel to how filmmakers use all sorts of tricks – like panning, cutting, or zooming – to overcome the fact that their medium imposes a frame on and flattens one’s experience of reality.