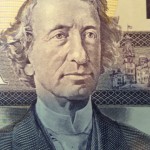 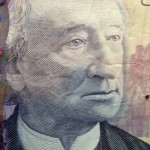 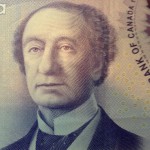 I was pleased to discover a monument to him in the crypt of St. Paul’s Cathedral in London (complete with his now politically unappetizing quotation “A British subject I was born, a British subject I will die”), and a stall plate in the chapel of the Order of the Bath, of which he was a Knight Grand Cross.

And here are some “warts and all” articles from the National Post:

Everyone knows John A. Macdonald was a bit of a drunk, but it’s largely forgotten how hard he hit the bottle

On June 1, 1866, the citizens of the Niagara Peninsula — the cradle of the War of 1812 — awoke to find themselves once again overrun by foreign invaders.

This time, they were Fenians: Battle-hardened veterans of the American Civil War carrying out a somewhat half-baked scheme to gain Irish independence. The insurgents would seize as much Canada as they could, and then trade it back to Queen Victoria in exchange for the Emerald Isle.

Alarms soon sounded throughout Upper Canada as Toronto regiments were scrambled and university students pulled out of final exams and whisked to the border regions.

Meanwhile, the colony’s minister of militia, one John A. Macdonald, was utterly wasted. As frantic telegrams poured in, he was reportedly too drunk to even read them.

“Hypothesis A would be that he went on a bender from time to time and unluckily the Fenians chose one of those moments to invade,” said historian Ged Martin, author of a 2013 biography of Macdonald. “Hypothesis B would be that he freaked out and took to the bottle.”

It’s well known that Canada’s first prime minister was a bit of a carouser, but history has largely forgotten just how hard John A. Macdonald hit the bottle. Even by the drunken standards of 19th century Canada — and even in a profession where most of his contemporaries were perpetually buzzed — Macdonald consumed shocking quantities of liquor.

He got belligerent at dinner parties, he disappeared on days-long benders and was repeatedly seen showing up to Parliament so blasted that he could barely talk. It would have destroyed lesser men, but the fact that Canada tolerated Macdonald’s boozing for so long may just be the greatest testament to how skilled he could be when he was sober.

Magistrates drank in court. British soldiers unlucky enough to be stationed in Canada were fortified against miserable weather by industrial outlays of rum. Across the border, Americans downed the equivalent as much as 26 litres of pure alcohol per year — and visitors of the period were known to remark that Canadians drank even more.

Sure, John A. Macdonald was a racist, colonizer and misogynist — but so were most Canadians back then

In 1887, the first of Vancouver’s many anti-Chinese riots had just broken out when Sir John A. Macdonald stood up in the House of Commons to propose further measures to keep out the Chinese.

The Chinese took white jobs, he said. The Chinese would breed a “mongrel” race in British Columbia and threaten the “Aryan” character of the Dominion. Altogether, the prospect of having white working classes living alongside Chinese could lead only to “evil.”

But in an odd aside, Macdonald admitted that he was supporting the policy largely because he was running a country full of racists.

“On the whole, it is considered not advantageous to the country that the Chinese should come and settle in Canada,” said Macdonald. “That may be right or it may be wrong, it may be prejudice or otherwise, but the prejudice is near universal.”

Although they were laying the groundwork for one of the world’s most tolerant nations, the Canadians of 1867 largely took white supremacy for granted. Blacks were barred from staying in Toronto hotels. The average British Columbian saw Asians as a threat to racial purity. And almost everybody was fine with the expectation that the native way of life would soon be extinct.

On Sir John A. Macdonald’s 200th birthday, the country’s founding prime minister has no shortage of critics to deem him a racist, a colonizer and a misogynist. They’re right on all counts, but the man who founded Canada was the product of an age that made Archie Bunker look like Mohandas Gandhi.

Sir John A. Macdonald, our first prime minister, famously described himself as a practical man. He even jokingly called himself a mere “cabinet maker.” He seldom had much to say about lofty constitutional, political or legal theory. Instead, he cultivated a reputation as a man who, while others philosophized, got things done: It was a small vanity.

Unfortunately, historians have taken him too much at his word. They will concede that Macdonald was sufficiently crafty to steer the Fathers of Confederation towards a union of the British North American colonies and territories. Yet they give him little credit for having either a grand vision or a deep understanding of the principles upon which its success was ultimately based (or indeed, of even having any principles at all).

As a disservice to his memory, this would be bad enough. However, if we are to treat his contribution to the founding of our federation as unprincipled horse-trading, it is the country itself we sell short.

During the past year, the anniversaries of two great founding conferences of Confederation in Charlottetown and Quebec City have caused me to reflect upon what Macdonald did and what he believed.

Two things seem very clear. The first is that only someone of great vision and foresight could have conceived and created the Dominion of Canada and set it on the path to becoming the great country we know and love today.

For however strong, enduring or even inevitable Canada looks now, it was none of those things in the 1860s. Macdonald himself was then co-Premier of a “United Province” that was anything but — poor, under-populated, divided by language, religion and culture, and hopelessly deadlocked in its political life. It had few economic or social connections with the other, isolated colonies on the northern half of the continent, which shared many of the same desperate weaknesses.

But if local circumstances were bad, British North America’s geo-political situation was even worse. To the south was a rising, covetous and hostile power. Within the previous generation, an American president won an election on a promise to annex much of British Columbia. And, emerging from the Civil War, many in the North held deep grievances against perceived British sympathy for the South.

On the other side of the ocean, Great Britain itself was increasingly indifferent as to the future of its North American possessions. Macdonald and his cohorts understood that the foreign affairs officials of the British Empire were far more concerned about how to “go along and get along” with an ascendant American Republic than how to protect the various peoples who had long stayed loyal to the Crown.

At the same time, in Europe, large entities were increasingly swallowing up smaller ones to create powerful new nation-states, like Germany and Italy. Why would the same trend not extend to this continent? Even as British North American leaders discussed their own possible Confederation, the mighty Union Army was rampaging through the southern Confederacy.

In short, Macdonald and his colleagues faced daunting challenges. The seemingly inevitable future was one of continued, miserable isolation and the absorption, one by one, of the British colonies and territories into the booming postwar United States. Dissolving the Province of Canada, establishing a federal system with the other colonies, and creating a whole new country — to be the second largest in the world — was little more than a flight of fancy.